The Street, the Beach, the Wave

Driving along the coast of Dakar, your eyes are greeted by row upon row of brightly painted gym equipment. Even so, you won’t ﬁnd a speciﬁc muscle beach here. Instead, every single beach is like a muscle beach. The equipment doesn’t sit idle either. Come down in the morning before the sun is up and it’s full with scores of people training. Sport is a huge part of life in Dakar.

With some of our party being skaters, our initial instinct was to search out the local skate scene. Prior to arrival, I had been put in touch with a local by the name of Mad in pixel or MAD for short. Alas, MAD happened to be moving houses when we ﬁrst arrived, so with the skateboarding plan out of action for the time being, I decided to head up to N’Gor (Dakar’s westernmost commune) on another tip. I went in search of surﬁng. Our local connect was Pierre Denaro – physio with Senegal’s national surf team and our conduit to the local scene. Senegalese surﬁng, as it turns out, is rather burgeoning. Tourists are beginning to ﬁnd out about the waves Senegal has to offer. On our arrival, Pierre and the national team had just returned from a sojourn to Tokyo. A place to which they hope to return in 2020 for the Olympics. 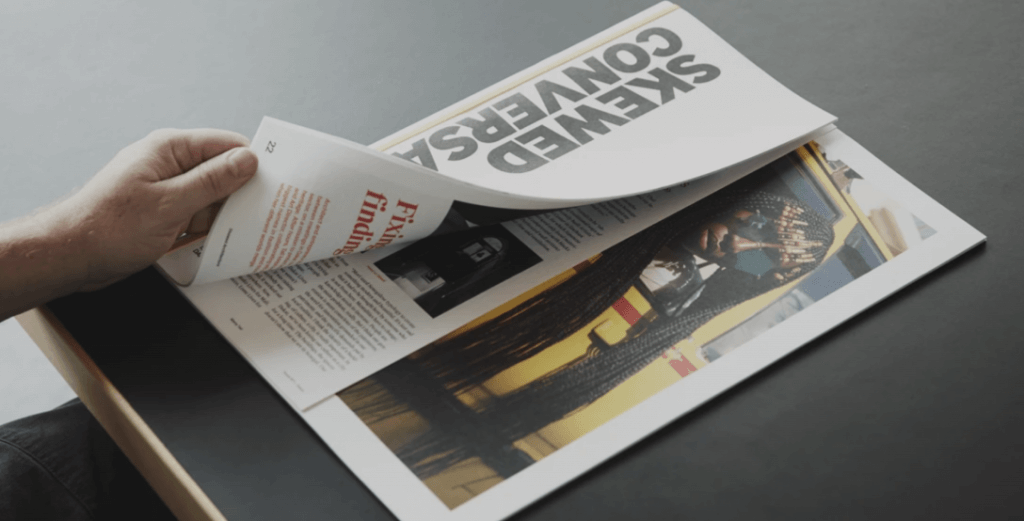 However, in Dakar, surﬁng doesn’t follow the traditional division lines between sport and lifestyle. Local OGs can also become coaches for the national team. Through Pierre we meet Pape Ndiaye, the founder of local crew and apparel label Take Off. Pape too had also just returned from Japan. It’s clear even just spending a little time with him that the younger surfers look up to him with the utmost respect. Local youngsters roll up to him for a ﬁst bump. Pape is super chill-ed out, and happy to lounge around showing me the highlights of his iPhone Camera Roll. His coaching seems to be more about stoking the riders out rather than giving them technical advice. The important piece of local lexicon to know here is the word ‘nakamou’. Taken literally it means ‘really’ but said with the correct intonation it’s more akin to a cheery ‘wassup’.

Just two weeks prior to my visit, Dakar hosted the WSL Senegal Pro. The very ﬁrst WSL event in the country. The driving force behind it was Oumar Seye – a retired pro who was the ﬁrst surfer from Senegal to be handed a pro contract. An event like the Senegal Pro isn’t cheap to put on, in Oumar’s estimation it cost around £90,000. All of which came through private sponsors. Organizing that amount of money again might prove difﬁcult and everyone we spoke to is keen for professional surﬁng to get some government backing. The general consensus is that Senegal has all the potential to be a great surf destination – especially as the one component of a surf scene that can’t be crafted from thin air already exists – great waves. 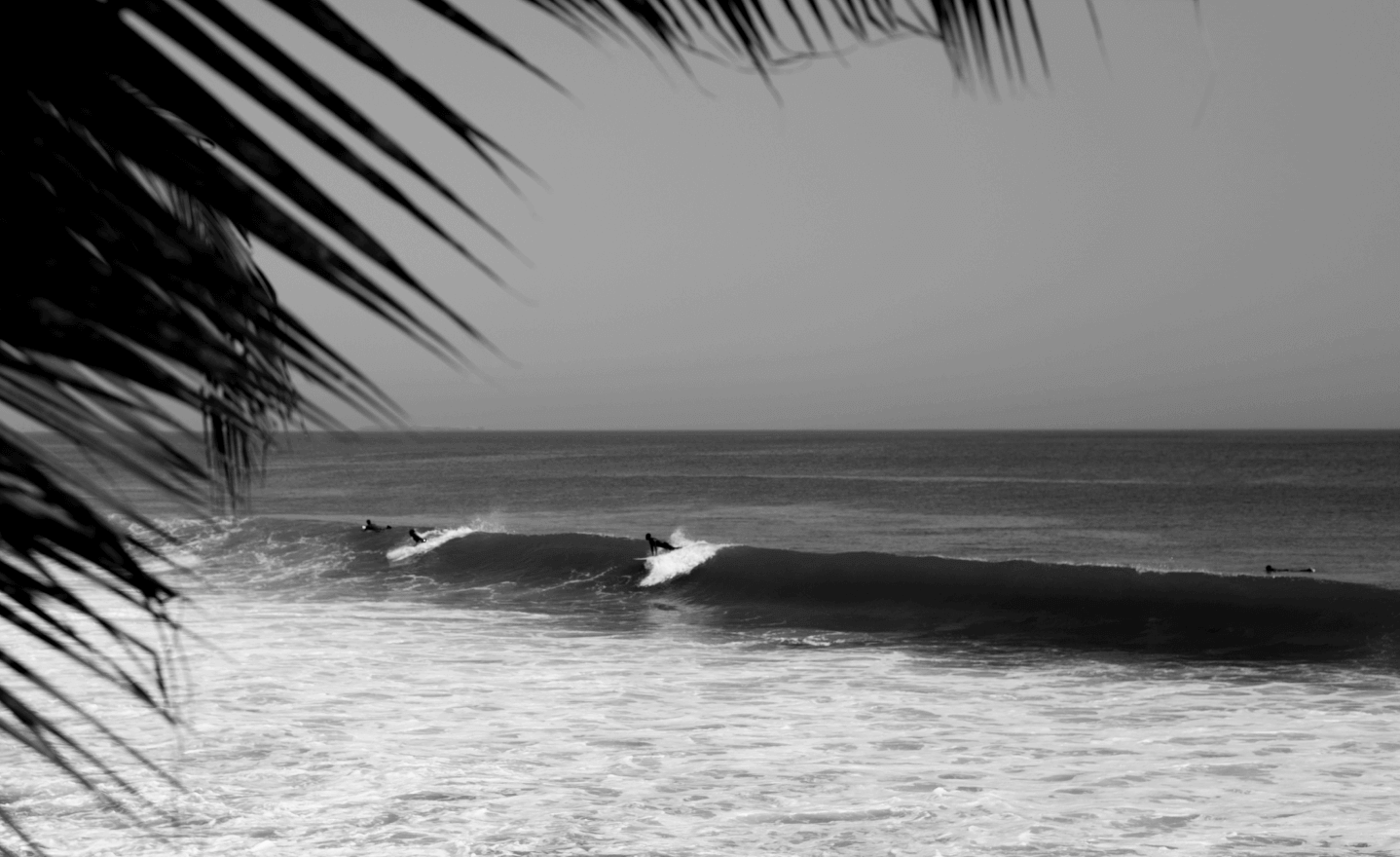 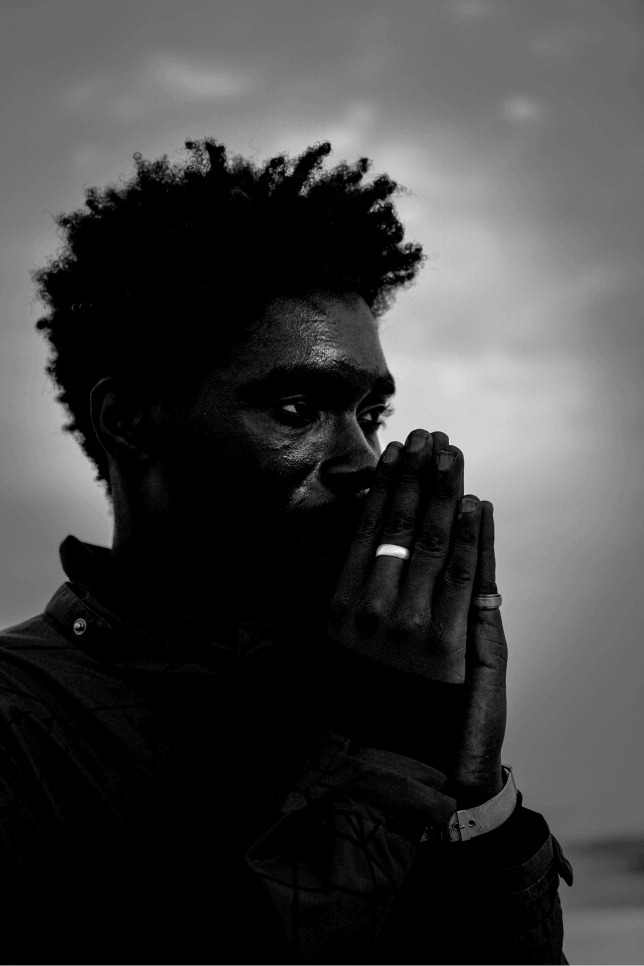 Having seen the waves of N’Gor, I received a timely WhatsApp from MAD. He was all moved into his new abode and was going to be skating that evening. MAD wanted me to meet him at Place du Souvenir Africain. So I took a trip down from N’Gor to check out the spot. Dakar’s architecture doesn’t generally lend itself to skating. There is a skatepark but the entry fee seems prohibitive. I passed it numerous times on the trip and no one ever seemed to be there. For street spots, the rule of thumb there seems to be any place with smooth ground is also right in the middle of trafﬁc. Place du Souvenir Africain is an exception to this rule. It’s a plaza spot on the beach with some interesting features including a ﬂat bar that the locals can feeble grind all day long. If you’re going to skate in Dakar this is one of two spots that are frequented. The other being the Blaise Senghor cultural centre.

After a decent session I sat down with MAD to chat. MAD’s taste skew more towards the artsier side of skateboarding. He’d rather watch videos with ‘nice visuals’ than robotic tricks. When I asked his favourite skater, without hesitation his response was Dylan Rieder. “He was so cool. Before I discovered him I was into Austyn Gillette and Paul Rodriguez. All of them have good styles but Dylan was the best. People here call me Dylan. Black Dylan.”

The scene is tiny but closely knit. MAD could count the exact number of skaters living in Dakar – twenty six. All of whom he knows personally. “Before we had many skaters skating in Dakar but we never met. So we created DakSkate, the ﬁrst Facebook page for skaters in Dakar.” With so few skaters, the absence of a skate shop is hardly surprising. As MAD explained, “we don’t have a skate shop here so sometimes we go to the surf shop and they buy skateboards. Maybe someday there will be a skate shop here. Maybe we will make that a project. To do our own skateboarding brand and develop skating here.” 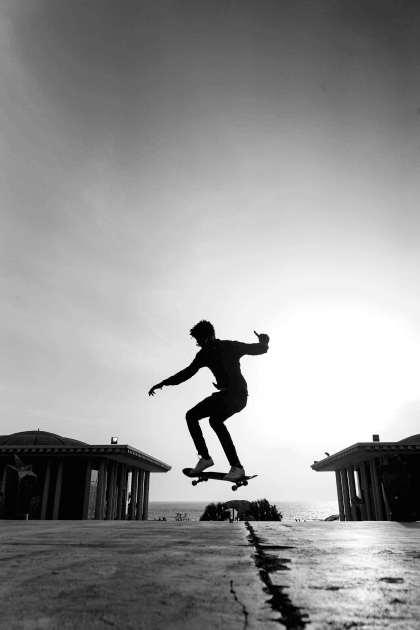 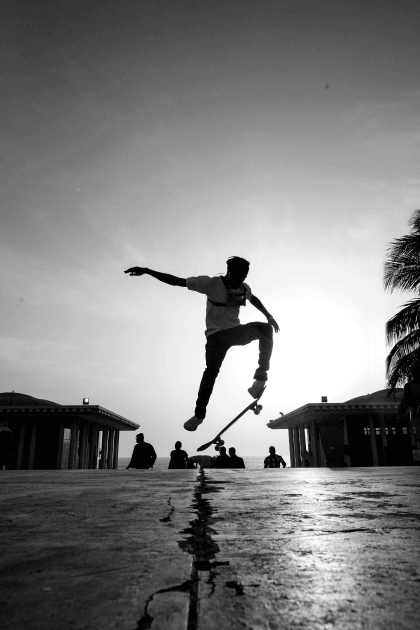 Having witnessed surﬁng and skating, I was still curious about one more sport – Senegalese wrestling or lutte. A sport that ﬁnds its origins in the folk wrestling traditions of the Serer people (a West African ethnoreligious group that forms 15% of Senegal’s population). It is highly steeped in tradition, with a huge ritual element. It is also the national sport. Incredibly lucrative for the talented few that manage to wrestle their way to the top. Elite wrestlers are among the most famous and wealthy people in the land. Only football vies for as much attention as lutte. With fame and fortune to be found, we wondered what the journey to pro looks like.

Since my time in Dakar coincided with a break in the match calendar, I had to ﬁnd other means so to satisfy my curiosity. It was only towards the tail end of the trip that some available lutteurs Sénégalise were located. So my ﬁnal morning was spent with Double Moteur and Gams Boy, childhood friends who worked their way up the ranks together. With his star rising in the wrestling world, Moteur is the neighborhood sweetheart. As I followed him round, he was continuously stopped by people wanting to say hello. He’s a local hero with a gentle soul. His mother insists he wasn’t misbehaved at all during his youth. So how did Moteur acquire his name? Gams explains: “It was at his previous job as a car mechanic. His non stop energy led his friends at that job to coin him Double Moteur because he never tired.” The day I met them was actually their day off. But as I was in town they kindly agreed to go through a training session and a bit of sparring together to show us the intricacies of the sport. Gams is dwarfed by Moteur but when they spar its rather even. Sparring with a disparity in weight class is a way to improve. If you can take down a far larger man than yourself, then an opponent in your own size should be toast! Technique not just sheer physical size is important.

«Before matches wrestlers work themselves into trance like states with mystic rituals.»

The mystical side of the sport isn’t simply lip service. Serious money is spent on
acquiring correct mystic items to give a competitive edge. Wrestlers have members of their entourage travelling huge distances in search of said items. Before matches wrest-lers work themselves into trance like states with mystic rituals or ‘gris-gris’ with the help of a spiritual guide called a marabout. Usually each wrestler will also perform a bàkk – a performance aimed at establishing psychological dominance over the other wrestler by boasting about oneself. Speaking with Moteur and Gams, it’s evident that the mind plays just as much a part in deciding the outcome of matches as the obvious physicality required. They both emphasize the ability to look the other competitor square in the eye without ﬂinching. Mysticism forms an integral of psychological edge.

What can I say about getting active in Dakar after just a brief stint there? Well wrestling is absolutely huge. At the same time surfing and skating are growing. Kids are learning that there are alternatives to the big two. 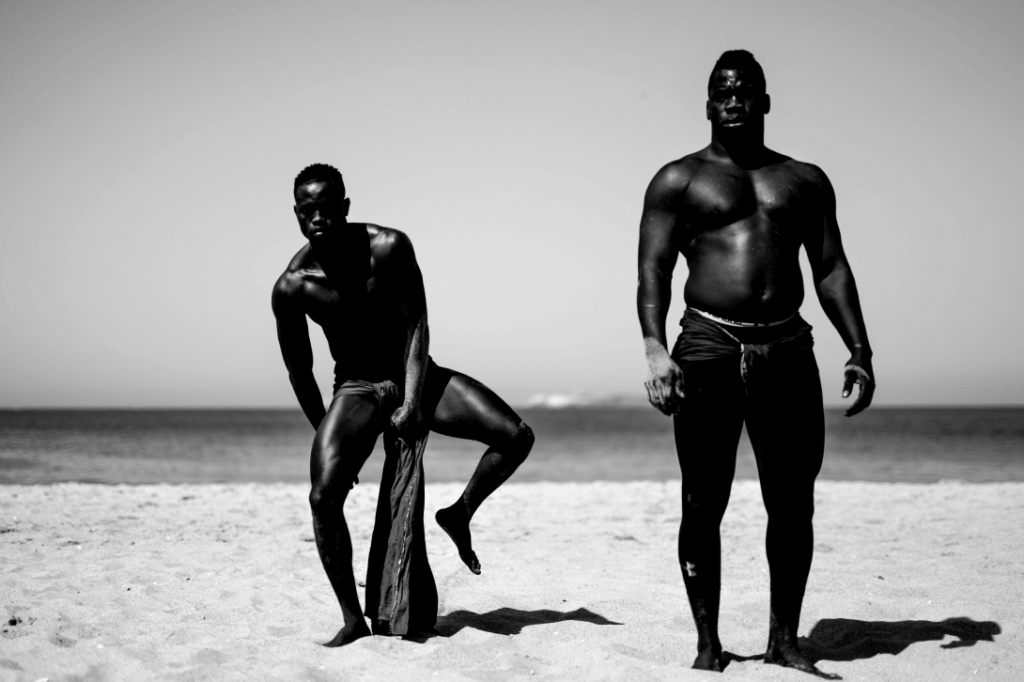 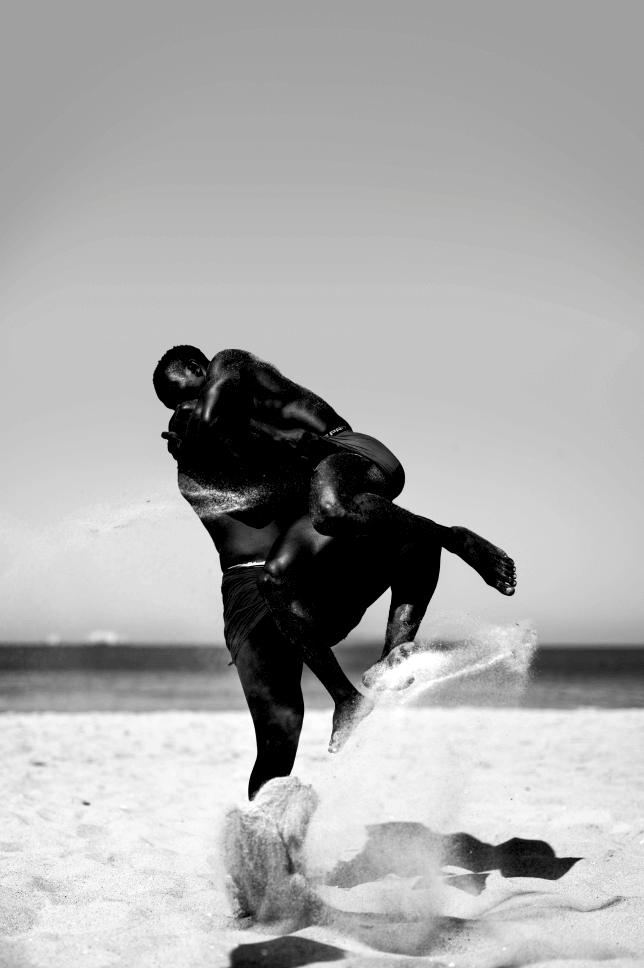 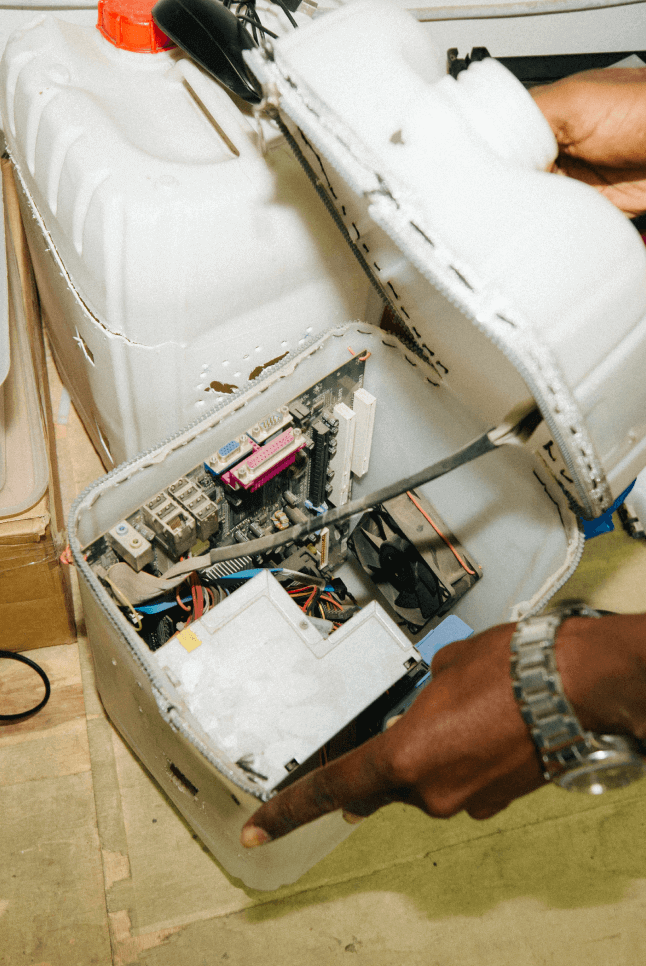 Digital House on a Digital Earth

Digital House on a Digital Earth